If you don’t care about the long-term results, then sure one size fits all…

It seems like we have to learn the same lessons over and over. In 1986, I was a new District Conservationist in the Carroll Field Office in West Central Iowa. NRCS was just rolling out the Conservation Reserve Program (CRP). In those first years, we conservation planners wrote one CRP plan after another, for pure stands of smooth bromegrass on CRP. It only took a few years before the wildlife biologist realized that a solid seeding of smooth bromegrass was almost worthless for wildlife habitat.

From solid stands of bromegrass, we migrated to solid stands of switchgrass. Switchgrass initially provided better habitat. But in time, biologists realized switchgrass became so dense that many species of wildlife would not use it for habitat. Next, we tried a 3-way mix of native grasses. That was a little better, but eventually we found we needed to add forbs (wildflowers) to get the diversity we desired. Even that wasn’t enough. It is only in the past 6 to 8 years we have realized that all seedings need disturbance…tillage, fire, or grazing.  What we know now is that all grassland habitats will steadily decrease in habitat value 5 to 8 years after the initial seeding without some type of disturbance.

A few months ago, I read an article entitled Allowing variance may enlarge the safe operating space for exploited ecosystems. As I read the article, there was one concept that caught my attention; “…actions to decrease variance over short timescales, when applied continuously, may lead to long-term ecosystem changes with adverse consequences.”

Immediately I thought of how we, in agriculture, decreased the variance of weed populations by using the Roundup Ready system. In fact, we used it to the point where it has backfired and created resistance to the Roundup Ready system. I thought too, of the study suggesting that increased no-till, combined with surface application of phosphorus, had probably worsened the Harmful Algal Blooms (HABs) in the Western Lake Erie Basin. No-till initially decreased soil erosion which helped reduce HABs. But after extended widespread use, that led to phosphorus stratification in the top 1 or 2 inches of the soil and the problem actually worsened. 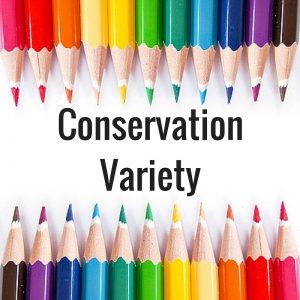 To me, the article was pointing out that the “one size fits all” approach may create more problems than it solves. Not really trusting my analysis of the subject matter, I sought clarification from one of the co-authors, Dr. Steve Carpenter, Director of the Center for Limnology at the University of Wisconsin-Madison.

According to Dr. Carpenter, resource professionals need to be careful not to look for the silver bullet, or the one size fits all approach. And focusing on one practice to manage for predictable outcomes is risky. In fact, more often than not, it backfires.

I agree. Resource professionals have access to a variety of tools for each and every resource problem. And we need to remember that conservation recommendations need to be individualized at the farm level, so that farmers can choose from a set of options. We should not encourage all farmers to solve a resource problem with any single conservation practice. Instead, we should encourage a systems approach. To keep moving in a positive direction, soil and water conservation requires variations within a farming community and individual fields need multiple Best Management Practices (BMPs) to create redundancy for resource protection. All BMPs fail at some level. Lower variability in the short term raises the variability in the longer term.

Regardless of whether it is voluntary or regulatory, effective conservation has always been about options and variety. Whether it is cover crops, terraces, no-till, buffers, or sediment basins, there is no “one size fits all.” Controlling variance, by promoting one or just a few practices, will lead to long-term changes with adverse consequences. As Dr. Steven Carpenter says, “Healthy things are variable.”