In early September, Peggy and I had the privilege of hanging out with Franklin and Eleanor Roosevelt; or at least we posed for a photo with their bronze likenesses. 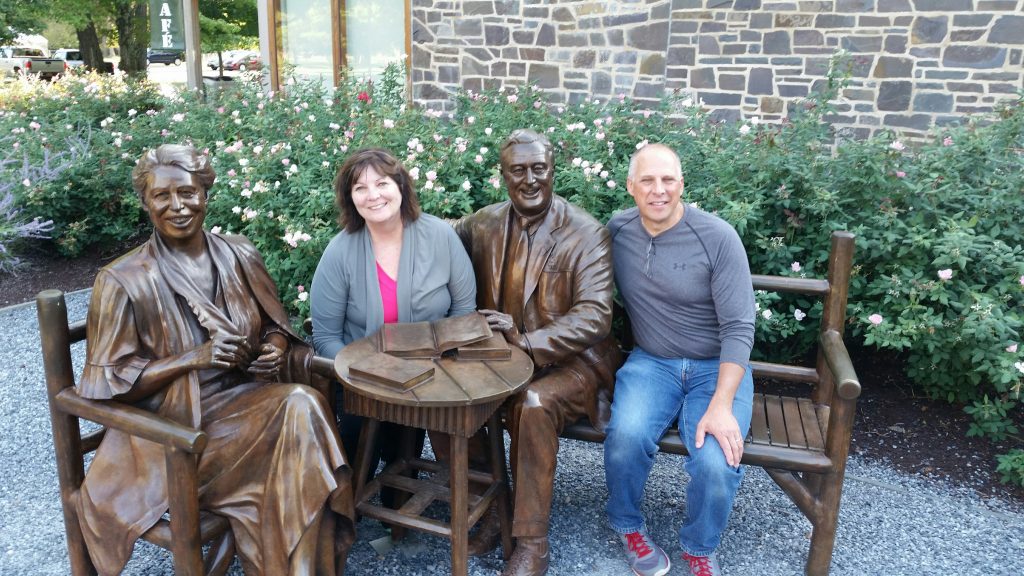 This year, our annual vacation took us to the Northeastern region of the United States.  Along the way, we stopped at the Franklin Delano Roosevelt Presidential Library in Hyde Park, New York.  Peggy and I spent a total of seven awestruck hours touring the library and the FDR home.  We agreed it is a “must see” for everyone.

Arguably, FDR had one of the most difficult and interesting presidential tenures.  There was the Great Depression, Repeal of Prohibition, Social Security Act, Pearl Harbor, and WWII to list a few. Included among these amazing presidential accomplishments, I find FDR’s commitment to conservation most fascinating.  Roosevelt’s conservation vision emphasized soil conservation, along with many other natural resource priorities. Prior to Roosevelt’s New Deal, poor agricultural practices had contributed to soil depletion on millions of acres, leading to decreased crop yields. FDR set up effective programs to address this national menace head on.  Some of the most notable events during FDR’s presidency include:

“A lover of nature and rural life, FDR had a keen interest in conservation. He made it a major focus of his presidency.”  FDR Presidential Library

Eighty years!  Yes eighty years.  I wonder what FDR would think of our inability to control soil erosion after 80 years.  I have to think this might be one of the most disappointing shortcomings in his legacy.

I found these facts most interesting about FDR and his presidency: