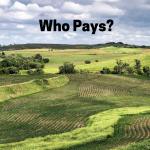 Last month, I had one of those aha moments.  A reporter was asking me about my thoughts on Iowa’s water quality and whether I thought shifting rainfall patterns (climate change) could be affecting nitrogen and phosphorus runoff.  I responded that the research on this topic was crystal clear — that over the last 20 years, the intensity of rainstorms has significantly increased, resulting in more runoff.  The seriousness of this phenomenon should not be dismissed or ignored.

Across most of the United States, the heaviest rainfall events have become heavier and more frequent. Since 1991, the amount of rain falling, during very heavy precipitation events, has been significantly above average. This increase has been greatest in the Northeast, Midwest, and upper Great Plains – more than 30% above the 1901-1960 average.

Combine that information with the research by Royer, et. al., that demonstrates “nearly all nutrient export occurred when discharge was greater than the median discharge, and extreme discharges (≥ 90th percentile) were responsible for greater than 50% of the NO3–N export and greater than 80% of the P export.

Right there, on the phone, in the middle of my interview, I experienced an incredible aha moment. Putting the pieces together, it hit me that increased runoff caused by climate change could easily erase the benefits made by farmers who make moderate improvements in soil and water conservation.  That realization was astonishing to me.  What this means to society is that we may never recognize improvements in water quality until conservation practices are applied at significantly greater rates.  So if we continue to use historical climate and rainfall data to predict our need for water quality-protection and soil conservation practices, we will continue to underestimate the amount of work needed to clean up our water.

During the interview, the reporter asked me, “Tom, who should pay for conservation; the public or farmers?”  Honestly, I get asked this question a lot, so you think I would be prepared.  But it was the context of the question that caused me to pause before answering with this line of reasoning.  If climate change is caused by society’s activities (CO2 emissions), then why should farmers be the ones to pay the full price of cleaning up our water?  If society’s actions cause these heaviest rainfall events to become heavier and more frequent, then why shouldn’t society share in the cost of conservation?  If society wants cleaner water and we can acknowledge that climate change plays a role in increased soil erosion, shouldn’t we expect society to split the bill with farmers?

Isn’t that kind of like buying an old car that has a lot of existing dents, getting into an accident, and expecting the insurance company to repair the vehicle to like-new condition?

Furthermore, can we regulate an industry (agriculture) if a significant portion of the “said pollution” is being caused by other cogs in society?  But of course, to shore up my argument, you would have to accept that climate change is due to human activities.  Novel concept.

The Survey Says…
Next Post: Trial and Error Conservation is Expensive